Home / SK Hydropower builder witnesses joint Belt and Road construction — CPEC role model
(China Economic Net) – This spring, along the Kaghan river of Mansehra district in Pakistan, Suki Kinari hydropower construction site was a hive of activity. A variety of large construction machinery and equipment were operating orderly, a deafening rattle came from those machines, and the construction teams were busy in their respective posts.
Suki Kinari hydropower project achieved financial close on December 31, 2016. As one of the biggest private-sector hydropower developments in Pakistan and one of the highest priority early harvest projects within the China-Pakistan Economic Corridor (CPEC), it is of great significance and is expected to be put into operation in 2022.
Suki Kinari Hydro Private Limited (SK Hydro), in which China Gezhouba Group holds a majority stake of 98%, is developing the project with an estimated investment of $1.96bn.
“I have witnessed the joint efforts of the Chinese and Pakistani employees in Suki Kinari Hydro Private Limited (SK Hydro). Relevant government departments of the two sides have forged ahead with strong cooperation. I think the project is an accurate portrayal of the joint Belt and Road construction, also the best witness of the historical friendship between China and Pakistan.” said Danish Haseeb Khan, deputy general manager of SK Hydro.

Danish has a deep connection with the SK project. When he joined the project in 2005, Mott MacDonald Ltd was conducting a bankable feasibility study on the project. Danish was then a member of the supervisory team and was responsible for submitting the electricity prices at the feasibility study stage and EPC (Engineering, Procurement and Construction) phase to Pakistan’s National Electric Power Regulatory Authority (NEPRA). In addition, he led the SK Hydro’s team to negotiate with Pakistani government agencies on franchise agreements (power purchase agreement, water use agreement, and execution agreement), and to discuss and finalize the financing plan with relevant banks (Industrial and Commercial Bank of China and Export-Import Bank of China).
The Chinese and Pakistani teams of SK Hydro have been working together on this project since 2015. In the process of pushing the financial close, they encountered many difficulties. Danish told China Economic Herald reporter that when the Pakistani team completed the land acquisition and registration documents, it was very close to the deadline required by the government for the financial close. “Chinese lending institutions could only make the loan after the successful registration of our Pakistani team, so I was very worried at the time that the process could not be completed before the financing was closed. However, I was amazed by the ‘Chinese speed’ of our Chinese team and relevant lenders who worked tirelessly to follow up all the procedures promptly to achieve the financial close on time.” said Danish.
As far as he can remember, SK Hydro has been adhering to its corporate social responsibility (CSR) to the local residents throughout the construction period of the project. The CPEC is not only about construction projects, but also for the well-being of the people in the areas where those projects are located, Danish said that he always remembered those words from one of his Chinese colleagues.
Keeping CSR in mind, SK Hydro organized a children’s painting competition in 2018 among the schools where the hydropower station is located, in which students from grade one to grade five picked up their brushes to depict visions, combine imagination with reality, and explore the unique charm of local culture. A total of 100 children from 32 schools took part in the event, and 20 children won the prize. In 2019, SK Hydro held an English speech competition in the project construction area. 27 schools participated in the competition and 25 students won the prize. These activities aim to encourage local youth to achieve higher goals in life and make positive contributions to the development of Pakistan. 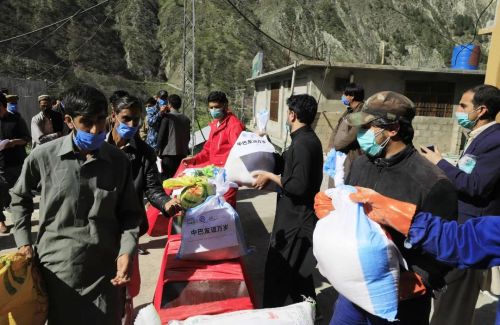 SK Hydro employees donate daily supplies to local residents during the pandemic.
The year 2020 has been a most extraordinary one. In the trying times of the sudden onslaught of COVID-19, the Chinese and Pakistani people reached out to each other. In Pakistan, the raging pandemic has led to the closure of schools and businesses. In order to ensure the smooth construction of the project, SK Hydro has worked hard to overcome numerous difficulties including communication and traffic control.
“Despite the difficulties, we still hold in our hearts the interests and concerns of local residents. In March 2020, we distributed food, masks, protective clothing, etc. to needy families in the areas where the hydropower stations are located to help them overcome difficulties. In November 2020, we carried out an activity themed ‘Caring for the Flower of Chin-Pakistan Friendship’, providing over 100 students from 10 schools stationery and warm clothes,” Danish said.
“Every year, we cooperate with Khyber Pakhtunkhwa Provincial Forestry Bureau and Energy Bureau to plant trees. In early March of this year, we planted 1,500 saplings at the hydropower station to maintain the ecological environment on the Kaghan river. During the pandemic, we provided nearly 5,000 jobs for local residents in Pakistan. We are proud that our efforts have been highly praised by local authorities and residents,” Danish added. 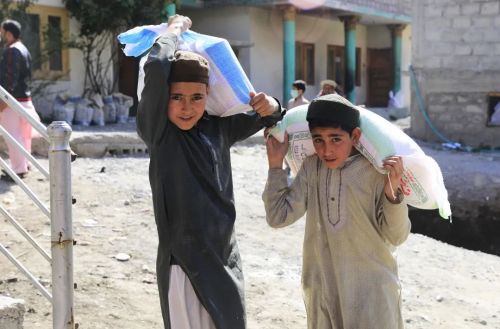 The Chinese version of this article was first published in China Economic Herald.